Lattebusche has been a member of Agriform since 1993 and produces Piave PDO and Montasio PDO cheeses at its plant in Busche (BL).

Dimitri works at the Lattebusche dairy in Busche. For over forty years, his alarm has been going off daily at 2:30 a.m. and he has put plenty of hard work and enthusiasm into transforming milk into Piave PDO and Montasio PDO cheeses.
For him, cheesemaking is all about commitment, experience and “devotion” to the raw material, milk from the Belluno Dolomites.
Only high-quality milk is used, sourced exclusively from pastures and farms stocked with the Bruna Italiana, Grigia Alpina, Frisona Italiana and Pezzata Rossa breeds in the province of Belluno. Thanks to the production process adapted to the most innovative systems and the addition of selected milk enzymes, the production of excellent cheeses is guaranteed. 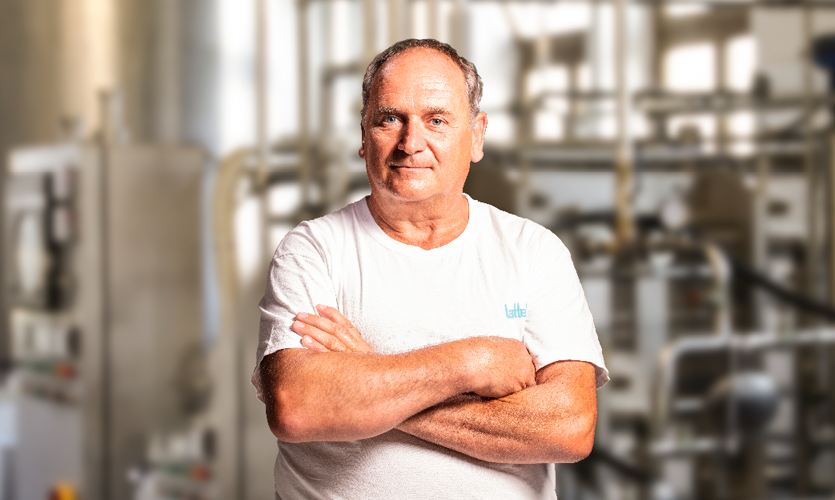 “For the last forty years, I have been making Piave PDO and Montasio PDO on a daily basis from an excellent raw material: milk from the Belluno Dolomites.”

The hamlet of Busche is in Cesiomaggiore, one of fifteen municipalities inside the Belluno Dolomites National Park. Some of the most famous and evocative peaks in the Dolomites dominate the province of Belluno: Pelmo, Civetta, Cristallo, Antelao, Tofane and Marmolada, “magical” mountains with ancient forests and green valleys full of pastures unfurling at their feet.
Mountains listed by UNESCO as Natural World Heritage Sites and considered to be “some of the most beautiful mountain landscapes in the world” (UNESCO Report 2009) 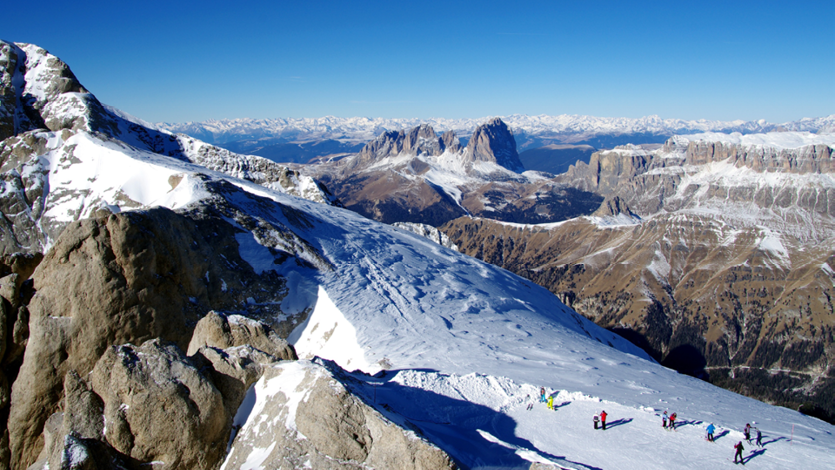 The source of the River Piave is in the Carnic Alps and it crosses the whole of Veneto from north to south, from the Belluno area to the eastern Veneto plain, before finally flowing into the Adriatic Sea. Also known as the “Fiume sacro alla Patria” (river sacred to the homeland), due to the historical events that took place on its banks during the First World War, it is the fifth longest Italian river to flow directly into the sea.
Until the nineteenth century the river was known as “la Piave” (feminine noun) in Italian, and indeed the original acts and documents of the Venetian Republic and the rulings and sentences of the ancient Magistrato alle Acque (Venetian magistracy responsible for water management) make constant reference to “la Piave”. It seems that Carducci was the first to assign a male gender to the river in his “Ode al Cadore”.

The Piave was the Italian army’s rearmost defensive front following its defeat in the Battle of Caporetto during the First World War. In addition to its strategic importance, maintaining the line of the Piave was also important in terms of keeping up the army’s morale following the retreat from the Isonzo line.
After the armistice of 4 November 1918, General Lorenzo Barco dealt with the problem of repairing and restoring the banks of the Piave and other rivers in Veneto and Friuli, which had been damaged during the war. The reconstruction work, which has lasted all the way through to today, was completed in time to protect the population from potential winter flooding. 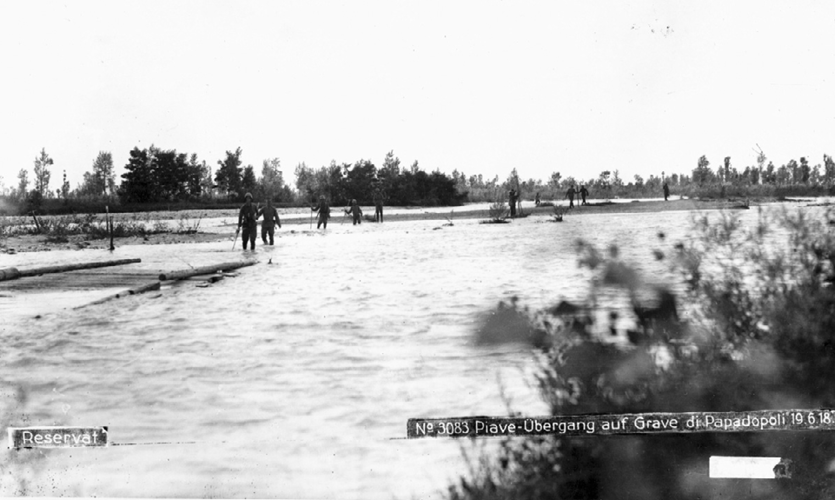 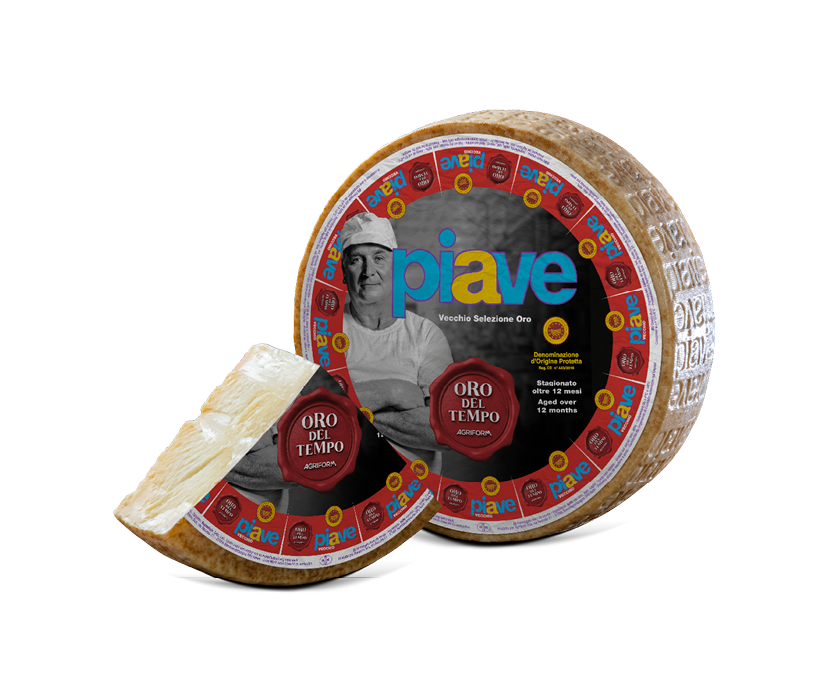 THE BIRTH OF THE KASÈL

A product of the Belluno Dolomites, Piave PDO cheese owes its origins to the tradition, experience and ancient “know how” of local cheesemakers.
The beginning of extensive dairy farming, particularly involving the Bruna Alpina breed, coincided with the end of the intensive exploitation of woodland in the Belluno area, which took place at the same time as the decline of the Venetian Republic.
Dairy farming by small-scale mountain landowners and sharecroppers on the valley floor therefore became the most valid and natural production alternative for Belluno’s fragile rural economy, overwhelmed by the crisis of the Venetian Republic.
In order to cope with the massive exodus and the area’s dramatic socio-economic decline at the end of the nineteenth century, on 8 January 1872, upon the initiative of the local parish priest Don Antonio Della Lucia, the first cooperative dairy in the newly established Kingdom of Italy was set up in Canale d’Agordo and was known as a “kasèl” in the local dialect.
The idea of grouping the village’s small-scale farmers together to process the milk “in shifts” at a single cooperative dairy, thus reducing production costs and increasing profits, became popular during those difficult years in every small town in the mountains of Belluno, making a decisive contribution to the development of local dairy traditions.

Piave PDO cheese is made exclusively in the province of Belluno, the northernmost part of the Veneto region. The processing cycle for Piave PDO cheese begins with pasteurisation of cow's milk, followed by the addition of typical milk enzymes and rennet, which react with the casein to bring about coagulation.
After curdling, the curd is portioned into circular containers, where it is left to drain to remove excess whey.
The cheeses are pressed and placed inside branded ring moulds, with the name of the cheese engraved on the inside edge.
At this point, the cheeses inside the moulds are placed on special supports and stored in “rest towers”, with controlled temperature and humidity levels, where they remain for an initial, partial ripening and texture development.
When it comes out of the “rest towers”, the cheese is a deeper yellow colour and has a thin, permeable rind that makes it compact and allows it to be immersed in brine for the final stage in the cycle, namely salting.
At the end of the production cycle, the Piave cheese is ready to be taken to the maturing warehouse, where stored on wooden shelves and periodically brushed, turned and kept in optimal temperature and humidity conditions for the necessary period of time.

There are five different types of Piave cheese: Fresco matured for 20–60 days, Mezzano from 60 to 180 days, Vecchio for more than 180 days, Vecchio Selezione Oro matured for more than 12 months, and Vecchio Riserva matured for more than 18 months.
The rind of the Fresco and Mezzano types is thin and soft, with a light straw colour, while it is hard, with a deep straw colour tending to brown in the Vecchio type. The cheese itself is semi-hard, compact and white with no holes in the Fresco and Mezzano types, while in the Vecchio type it is hard, somewhat crumbly and straw-coloured. Piave PDO Vecchio Selezione Oro is a cheese with a friable and soluble structure, revealing a remarkable aromatic complexity. In addition to hints of vegetables, this mature cheese is enriched with toasted and fruity notes ranging from dried fruit to ripe exotic fruit. The flavour is characterised by an excellent balance of sweetness and savouriness with a long-lasting aftertaste. 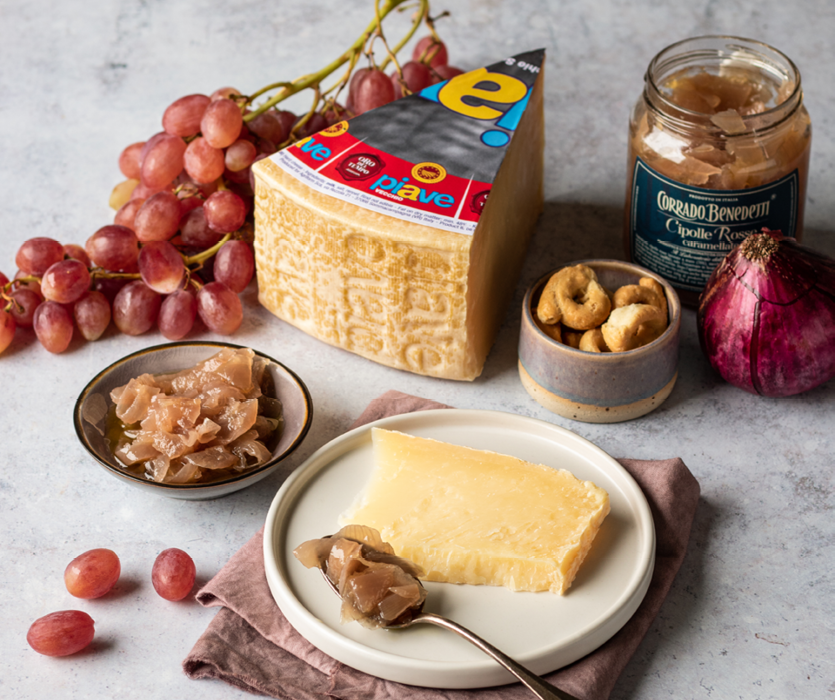 Piave PDO cheese is characterised by an intense, full-bodied flavour that increases as it matures, giving it a very particular taste that makes it unique.
Excellent with a good wine, the Fresco goes well with young and light white wines, the Mezzano with medium-bodied, fruity reds, while the more mature types should be savoured with full-bodied red wines. A particular pairing worth trying is Piave PDO Vecchio Selezione Oro with a good Malvasia Passito dessert wine.

Lattebusche, a member of Agriform, is a cooperative that has been producing fresh and matured cheeses using milk from the Belluno Dolomites since 1954, with a focus on sustainability and social responsibility.
Soft cheeses such as mascarpone and stracchino and hard and semi-hard cheeses such as Piave and Montasio are produced at the Busche plant, the Cooperative’s historical headquarters. The system’s versatility makes it possible to obtain 1 wheel of cheese every 11 seconds, for an overall potential production of 2,600 wheels during an 8-hour shift.
The automated maturing warehouse, with a 240,000-wheel capacity, ensures that the cheeses are perfectly matured. 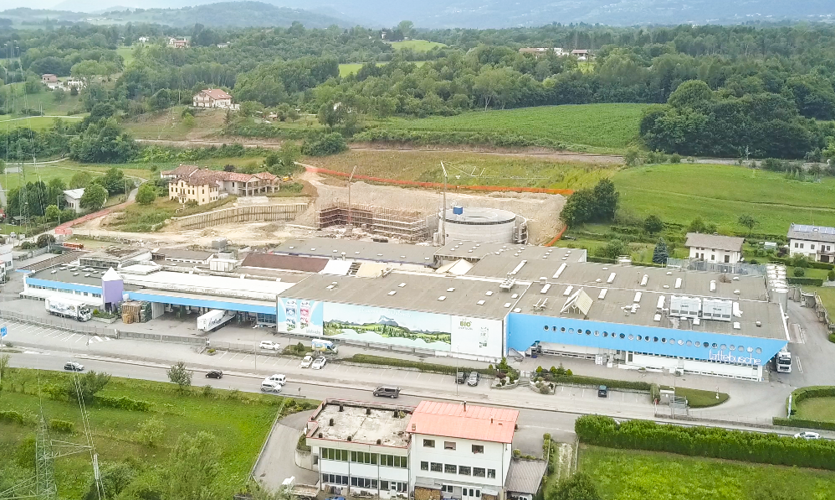 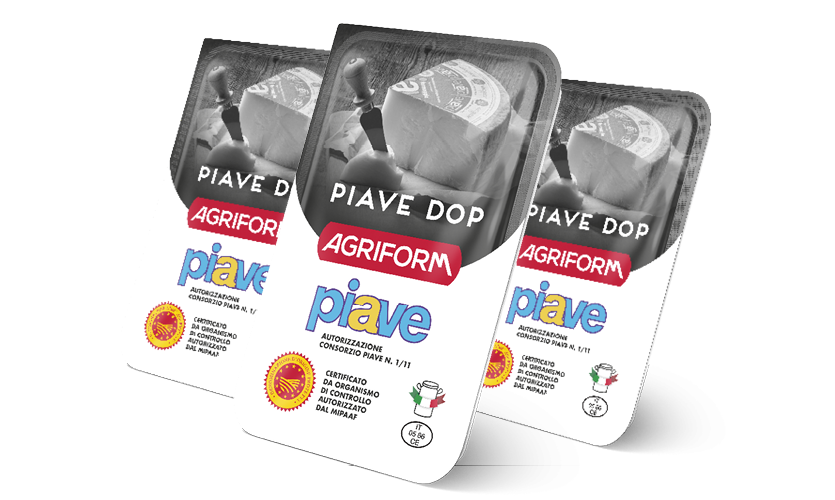 DISTRIBUTED SAFELY ALL OVER THE WORLD